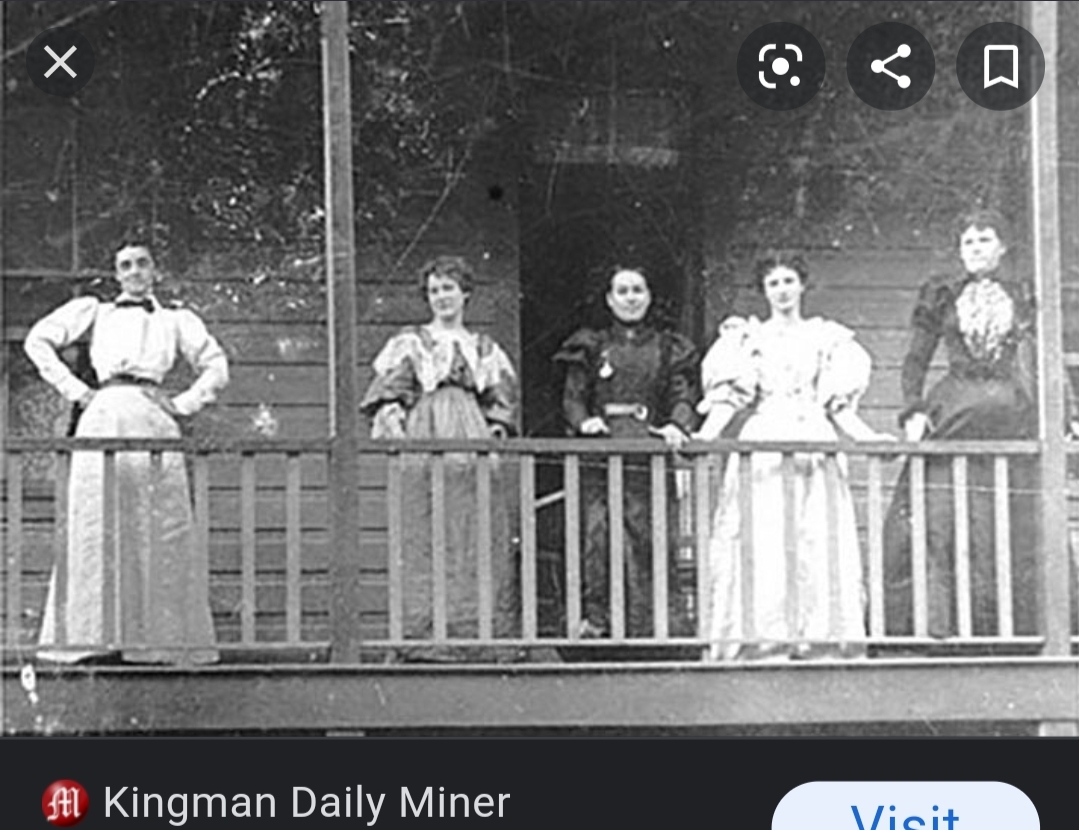 One of These Women is Jennie

Very little information about Jennie is readily available online, however I first learned her story while visiting the Jerome Historical Mine Museum in Jerome itself, so what little is known of her story is certainly verifiable in the historical sense.

According to several online articles (linked below), Jennie gave birth to a son named John in Brussels. When her son was old enough, the pair moved to the United States. Jennie left her son in a boarding school in Chicago while she herself moved out west, quickly becoming one of the most notorious and wealthy madams in the Arizona Territory.

In October of 1896, Jennie secured a mortgage on three small parcels on land in the copper mining village of Jerome, constructing a wooden building on the site called “Jennie’s Place.” While on paper Jennie claimed the building was a boardinghouse, in actuality it was one of the first brothels in Jerome. Over the next four years three fires would crash through the small village, and each time Jennie had to rebuild.

Yet despite the setbacks, Jennie was making the big bucks. By 1900, Jerome had incorporated as a city and was demanding all buildings be fireproof, which Jennie was able to accommodate in her latest brothel.

Jennie left Jerome in 1903, after being repeatedly harassed by a stalker, and settled in Goldroad instead. Goldroad was a small mining community about halfway between Kingman and Oatman that no longer exists today. All that's left of Goldroad is the mine which has operated on and off for more than a century now.

Unfortunately, Jennie’s stalker followed her there. While some claim the man titled himself as Jennie’s husband, the truth was he wanted Jennie and her money, and she was willing to give him neither. Jennie told anyone who would listen that the man was threatening her, and yet nothing was ever done about it.

Eventually the man grew violent, and after a morning of hard drinking in which he declared he would take Jennie’s money even if it killed him, he went to her house armed with a loaded pistol. After breaking in Jennie’s door, the man demanded she hand over her money. The two began to argue loudly, and Jennie ran out into the street dressed only in her nightgown. Her stalker then shot her four times, killing her right there in the street in broad daylight. The man then attempted to kill himself by firing a shot into his chest and then lying down in the street.

Instead, he was arrested and taken to Kingman for trial. Eventually, he was hanged for the killing after exhausting all of his appeals. Snippets of news articles from his trial survive today.

The story doesn’t end there however.

The murderer and Jennie were both buried in the old Pioneer Cemetery in Kingman. Jennie’s son paid for her to have a grave marker with the money he inherited from her. In 1917, the cemetery was moved to a new location at the behest of city planners. Any bodies that went unclaimed by family were left in situ. Jennie’s body was one of the unclaimed—as was her murderer’s.

In the 1940’s the remaining bodies were dug up and moved to one mass grave, with a high school being built on the sight of the former cemetery. Today, Jennie and her murderer are trapped forever, buried under the football field at the high school.

According to one source, Jennie’s bordello in Jerome still stands. Today however, the business is a jewelry store known as “Nellie Bly.” Having visited the store myself a few years back, my advice to any potential visitors is to not ask the women working there if the store is named after the journalist of the same name. The women I encountered that day got very prickly over that question to say the least and reminded me the name was Elizabeth Cochran’s nickname and that many women have used the name over the years. Excuse me for asking a question.

Jennie was an immigrant and a single mother. She rose from abject poverty to become one of the richest women in the Arizona territory. Sadly, with her success came the ire of a jealous man, and she lost her life because no one was willing to help protect her, a notorious woman of the night. And if all that wasn't sad and horrific enough, today, Jennie has to spend eternity trapped lying beside the man who put her in an early grave. Jerome locals claim Jennie's ghost now haunts the town she once called home, and I can only hope wherever her spirit ended up, she's no longer being tortured by the man who ended her life.

Are Ghosts Real? The Story of Belgian Jennie: The Richest Madam in the Arizona Territory by Peggy L Hicks

They Came to Jerome by Herbert V Young