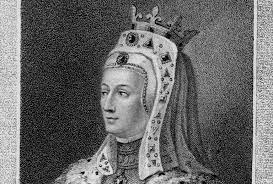 English Queen Remembered as the She-Wolf of France

Isabella was an English Queen who refused to fade into the background of the history books. She dealt with her husband’s boyfriends as long as she could, but eventually a girl can only take so much before she snaps. And when Isabella snapped, her husband paid dearly.

Isabella was the daughter of Philip IV of France and Joan I who was queen regnant of Navarre. Isabella was raised with her mother’s strong influence, and saw firsthand just how effectively a woman could rule. She was also raised in a loving home; her parents showed actual affection for each other unlike most couples of the era. Isabella was also well educated and grew to love books.

When she was twelve (if you believe the latter birth year), she was married off to the King of England, Edward II (who was twenty-three at the time). The only issue? Edward was gay. This isn’t even a historical debate like most historical figures from centuries back, where their inclusion in the LGBT community can only be theorized. Edward was hella gay, and he didn’t even hide it.

At the time of their marriage, Edward’s boyfriend was a man named Piers Galveston. Galveston did his best to embarrass Isabella, including one story that says he showed up to her wedding dinner wearing some of Isabella’s finest clothes and sitting beside the king in the place of honor (though some say this is a later fabrication and not an actual historical fact). What is a fact is that the tapestry created to honor the new king and queen was weaved with the family crests of Edward and, you guessed it, Galveston! Isabella, being only a teenager in a strange land at the time, took these slights as best she could, but to say her marriage was off to a rough start was an understatement.

Galveston was murdered in 1312. Unsurprisingly, the English barons were unpleased by their king flaunting his appreciation of his own sex while his queen sat by the wayside (though she was pregnant with their first child by this time). Isabella intervened on her husband’s behalf, trying to make peace between monarch and the aristocracy. While a peace was established for the time being, her work was more of a patch job than an actual lasting peace treaty. Isabella and her husband eventually had four children in total.

Edward was such a bad king, he is mostly remembered today for losing at the Battle of Bannockburn, in which Robert the Bruce eventually reclaimed the kingdom of Scotland for the Scots. Yeah, Edward was that English king (and no, Isabella never met William Wallace, in fact, William Wallace died a few years before Isabella ever even married Edward II—sorry Braveheart fans). During that war, Isabella was separated from her husband while three months pregnant. She wrote to Edward, asking him to return to her side to help her escape the Scottish warriors who were fast approaching. Instead of complying, Edward headed further south while Isabella received aid from the English barons. Two of her ladies in waiting were killed as Isabella narrowly escaped with her life.

Several years later, Edward had landed on a new favorite named Despenser. This boyfriend was even worse than Galveston had been, and some historians believe he may have gone so far as to either attempt or actual succeed in assaulting Isabella to keep her compliant. Isabella was stripped of her lands and lost custody of some of her children. Some even go so far as to say Despenser and Edward threatened to kill her if she stepped out of line.

Isabella was done taking her husband’s s*** however. Instead, she sailed for France under the guise of forging better relations between her husband and the French king, who by then was Isabella’s brother.

While in France, Isabella began an affair with an English knight who had fled his homeland after earning the ire of the king, also known as Isabella’s husband. Together, Isabella and her new beau Roger Mortimer hatched a plot to take England for themselves. They would get rid of Edward II and rule the country until Isabella’s son was old enough to rule in his own right.

And wouldn’t you know it, the plan worked.

When Isabella returned to England, the barons, who were at that point so fed up with their useless king, immediately backed Isabella’s side of the fight. Edward was removed from the throne and tossed in prison (this being the first instance of an abdication of an English king in history), while Despenser was brutally murdered. I’m sure Isabella watched the proceedings with a rue smile on her face.

The following year, Edward wound up dead. So sad; I’m sure everyone cried when they found out.

After a few years of ruling as her son’s regent, Isabella’s son, Edward III, got fed up with his mother and quasi-stepfather’s meddling. Edward had Roger executed and forced his mother into an early retirement. Isabella spent the rest of her life enjoying her new status as Dowager Queen and even joined an order of nuns.

Isabella remained close with her daughter, Joan. Joan became Queen of Scotland after marrying King David II, but Joan dumped the king and moved back in with her mother after discovering he was cheating on her. It would seem Joan learned well from her mother.

Isabella’s son, Edward III, claimed the French throne as his own after all of Isabella’s brothers died without daughters. The throne passed to Isabella’s male cousin, ending the Capetian Dynasty and launching the Valois. Unfortunately, Edward’s claimant to the throne would kick off a small conflict known as the Hundred Years’ War; which I’m sure you’ve heard of. So yeah, to say Isabella’s influence was felt long after her death would be an understatement to say the least.