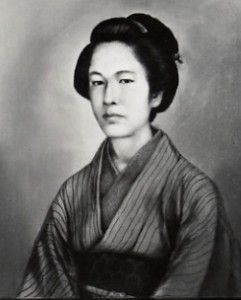 Takeko was born to a family from Aizu, but was adopted at a young age by a master swordsman. Takeko was trained in martial arts and became an instructor herself, allowing her to become a female samurai.

Takeko died in the Boshin War (a civil war between the western backed Meiji government versus the old ways or Shogunate in Japan—if you want to see a whitewashed version of these events check out the movie The Last Samurai starring Tom Cruise). The battle was very bloody, and even after the Shogun surrendered his followers refused to. The war dragged on for another year after the Shogun’s surrender.

Aizu—the region Takeko was from—refused to surrender until the very end, with most women taking their own lives after killing their children instead of surrendering. Around twenty or thirty of the women who refused to surrender teamed up to form a squadron, or Joshitai. These women were led by the Nakano family; Takeko, her mother, and her younger sister.

At the time of the final battle, Kouko was in her forties, Takeko was about twenty-two, and Yuko was only sixteen or seventeen. The female samurai joined up with some of the men still fighting, and the battle dragged on. On the night before the Joshitai were to attack Yanagi bridge, Takeko and her mother Kouko debated on how to deal with Yuko. Takeko and her mother were rightfully afraid for Yuko’s future, and they didn’t want her to participate in the battle. They talked of placing her in the country with another family, and then wrestled with what might happen should she be discovered. The mother and daughter also spoke of how to avoid being captured and taken alive.

In the end, Kouko and Takeko decided to bring Yuko with them. As the day dawned, Takeko raced forward onto the bridge and was said to have killed five or six enemy soldiers by herself by eyewitnesses. The women warriors from Aizu were equipped with swords and long polearms, while the imperial soldiers had guns and other advanced weaponry. But this didn’t stop Takeko from taking down several soldiers all on her own. However, Takeko was not fated to survive the day. After being wounded in battle, Takeko called her sister to her side. With her dying breath, Takeko asked Yuko for one final gift—cut off her head to stop their enemies from using her body as a trophy.

Yuko tried to comply, but was too weak to finish the job herself. Yuko eventually received help, and Takeko’s final wish came true. Her body was never used as a trophy, and today the place where her head is buried is a shrine in Japan.

Aizu fell after another week of intense fighting. When the soldiers surrendered, more than one tenth of those who gave themselves up were women. Sadly, the fall of Aizu meant the end for the rebellion, and the age of the samurai ended with it.

Yuko survived the battle and took refuge in a temple, the same temple where she buried her sister’s head.